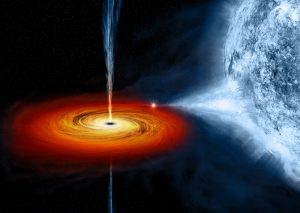 In the article (“With faint chirp, scientists prove Einstein correct”, p. A1, 2/12/16) we read that black holes were part of Einstein’s theory.   The truth is quite different.  “Einstein argued vigorously against black holes [as] incompatible with reality” (see “Black Holes” by R. Anderson) and his opposition held back their acceptance for many years.

Einstein was also wrong when he rejected Quantum Field Theory.  According to his biographer A. Pais,” QFT was repugnant to him”.  This is ironic because QFT, and only QFT, explains and resolves the paradoxes of Relativity and Quantum Mechanics that most people struggle with (see “Fields of Color: The theory that escaped Einstein” by this writer).

Perhaps the biggest irony is the statement, “according to Einstein’s theory, gravity is caused by objects warping space and time”.  While that is what everybody believes today, the truth is that Einstein saw gravity as a force field, similar to electromagnetic fields, except that it is created by mass, not charge. That an oscillating mass creates gravitational waves is no more mysterious or unexpected than that electromagnetic waves are created when electrons move back and forth in an antenna.  To Einstein, curvature was a secondary effect, similar to the alterations in space and time created by motion according to his Special theory of Relativity.

Black holes.  Contrary to many reports, black holes were not part of Einstein’s theory.   In fact Einstein argued vigorously against black holes [as] incompatible with reality, and his opposition held back their acceptance for many years.

Summary.  Gravitational waves are easy to understand if you accept gravity as a force field, similar to the electromagnetic field (QFT).  And while the contraction effect is more subtle, it is not that much different from the F-L contraction that has been accepted for over a hundred years.