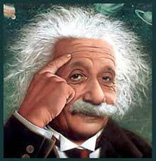 Many people believe that Einstein’s theory of general relativity states that gravity is caused by curvature in space-time. For example, here’s a recent question posted on Quora: “”Einstein tells us that gravity is motion in curved space-time, so why do scientists still call it a force?”.

Excuse me for shouting, but this one really makes me mad. EINSTEIN DIDN’T SAY THAT! In his theory of general relativity, developed in 1915, gravity is a force field, not much different from the electromagnetic (EM) field. It is NOT four-dimensional curvature. But first a little history.

The field concept was introduced into physics in 1845 by Michael Faraday during his studies of electric and magnetic phenomena. When James Maxell supplied equations for Faraday’s field in 1864, the field view of EM forces was generally accepted. However Isaac Newton’s theory of gravity, which involved “action at a distance”, remained unchanged. Newton’s theory was hugely successful, and is still taught in elementary physics classes today, but Newton was not satisfied with the idea of “action-at-a-distance”, saying “That one body may act upon another at a distance, through a vacuum, without the mediation of anything else… is to me so great an absurdity, that I believe no man who has in philosophical matters a competent faculty of thinking can ever fall into it.”

This changed, of course, when Einstein introduced his theory of general relativity in 1915. In Einstein’s words: “As a result of the more careful study of electromagnetic phenomena, we have come to regard action at a distance as a process impossible without the intervention of some intermediary medium… The effects of gravitation also are regarded in an analogous manner… The action of the earth on the stone takes place indirectly. The earth produces in its surroundings a gravitational field, which acts on the stone and produces its motion of fall… [T]he intensity and direction of the field at points farther removed from the body are thence determined by the law which governs the properties in space of the gravitational fields themselves.”

For those who don’t know what a field is, I offer this simple definition: A field is a property of space. There is no such thing as empty space. You can’t have space without fields. These fields obey laws (i.e., equations) that specify how a change at one point affects the field at adjacent points, and also how one field affects other fields.

It was Hermann Minkowski who introduced the idea of four-dimensional space-time, which Einstein initially called “superfluous erudition”. However he eventually accepted Minkowski’s interpretation as an alternate mathematical interpretation of his equations. That is, Einstein’s equations for the gravitational field are mathematically equivalent to a curvature of spacetime, for those who can picture such a thing. But equivalence doesn’t dictate reality. While the curvature interpretation is useful to physicists, it doesn’t change the fact that physically speaking, gravity is a force field. Nobel laureate Frank Wilczek put it this way:

“We can describe general relativity using either of two mathematically equivalent ideas: curved space-time or metric field. Mathematicians, mystics, and specialists in general relativity tend to like the geometric view because of its elegance. Physicists trained in the more empirical tradition of high-energy physics and quantum field theory tend to prefer the field view… As you can probably tell, I’m a field man.”

When Quantum Field Theory was perfected by Julian Schwinger in the 1950’s, the gravitational field found a natural place alongside the other force fields (EM, strong, and weak). In QFT even matter is made of fields. As my good friend Prof. Edward Finn asked, why would God chose fields for everything else and not gravity? Nobel laureate Steven Weinberg put it this way:

“In learning general relativity, and then in teaching it to classes at Berkeley and MIT, I became dissatisfied with what seemed to be the usual approach to the subject. I found that in most textbooks geometric ideas were given a starring role, so that a student… would come away with an impression that this had something to do with the fact that space-time is a Riemannian [curved] manifold… But now the passage of time has taught us not to expect that the strong, weak, and electromagnetic interactions can be understood in geometrical terms, and too great an emphasis on geometry can only obscure the deep connections between gravitation and the rest of phys¬ics… In my view, it is much more useful to regard general relativity above all as a theory of gravita¬tion, whose connection with geometry arises from the peculiar empirical properties of gravitation.”

This doesn’t mean that the four-dimensional curvature interpretation is not useful. It is a convenient way of handling the mathematical relationships in Einstein’s equations. But I say shame on those who try to foist four-dimensional curvature onto the public as essential to the understanding of relativity theory. Unfortunately this view has been around for 100 years and has become the “accepted truth”. I think it’s time to WAKE UP AND SMELL THE FIELDS.