General Relativity is the name given to Einstein’s theory of gravity that was described in Chapter 2 of my book. As the theory is usually presented, it describes gravity as a curvature in four-dimensional space-time. Now this is a concept far beyond the reach of ordinary folks.. Just the idea of four-dimensional space-time causes most of us to shudder… The answer in Quantum Field Theory is simple: Space is space and time is time, and there is no curvature. In QFT gravity is a quantum field in ordinary three-dimensional space, just like the other three force fields (EM, strong and weak).

This does not mean that four-dimensional notation is not useful. It is a convenient way of handling the mathematical relationship between space and time that is required by special relativity. One might almost say that physicists couldn’t live without it. Nevertheless, spatial and temporal evolution are fundamentally different, and I say shame on those who try to foist and force the four-dimensional concept onto the public as essential to the understanding of relativity theory.

The idea of space-time curvature also had its origin in mathematics. When searching for a mathematical method that could embody his Principle of Equivalence, Einstein was led to the equations of Riemannian geometry. And yes, these equations describe four-dimensional curvature, for those who can visualize it. You see, mathematicians are not limited by physical constraints; equations that have a physical meaning in three dimensions can be generalized algebraically to any number of dimensions. But when you do this, you are really dealing with algebra (equations), not geometry (spatial configurations).

By stretching our minds, some of us can even form a vague mental image of what four-dimensional curvature would be like if it did exist. Nevertheless, saying that the gravitational field equations are equivalent to curvature is not the same as saying that there is curvature. In Quantum Field Theory, the gravitational field is just another force field, like the EM, strong and weak fields, albeit with a greater complexity that is reflected in its higher spin value of 2.

While QFT resolves these paradoxical statements, I don’t want to leave you with the impression that the theory of quantum gravity is problem-free. While computational problems involving the EM field were overcome by the process known as renormalization, similar problems involving the quantum gravitational field have not been overcome. Fortunately they do not interfere with macroscopic calculations, for which the QFT equations become identical to Einstein’s.

Your choice. Once again you the reader have a choice, as you did in regard to the two approaches to special relativity. The choice is not about the equations, it is about their interpretation. Einstein’s equations can be interpreted as indicating a curvature of space-time, unpicturable as it may be, or as describing a quantum field in three-dimensional space, similar to the other quantum force fields. To the physicist, it really doesn’t make much difference. Physicists are more concerned with solving their equations than with interpreting them. If you will allow me one more Weinberg quote: 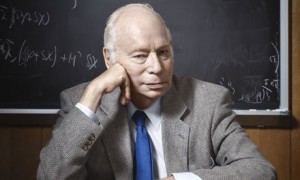 The important thing is to be able to make predictions about images on the astronomers photographic plates, frequencies of spectral lines, and so on, and it simply doesn’t matter whether we ascribe these predictions to the physical effects of gravitational fields on the motion of planets and photons or to a curvature of space and time. (The reader should be warned that these views are heterodox and would meet with objections from many general relativists.) – Steven Weinberg

So if you want, you can believe that gravitational effects are due to a curvature of space-time (even if you can’t picture it). Or, like Weinberg (and me), you can view gravity as a force field that, like the other force fields in Quantum Field Theory, exists in three-dimensional space and evolves in time according to the field equations.