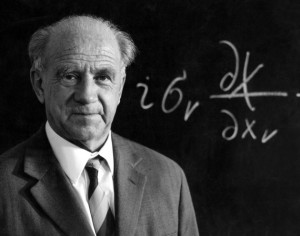 The probabilistic interpretation of Schrödinger’s equation eventually led to the uncertainty principle of Quantum Mechanics, formulated in 1926 by Werner Heisenberg. This principle states that an electron, or any other particle, can never have its exact position known, or even specified. More precisely, Heisenberg derived an equation that relates the uncertainty in position of a particle to the uncertainty of its momentum. So not only do we have wave-particle duality to deal with, we have to deal with particles that might be here or might be there, but we can’t say where. If the electron is really a particle, then it only stands to reason that it must be somewhere.

Resolution. In Quantum Field Theory there are no particles (stop me if you’ve heard this before) and hence no position – certain or uncertain. Instead there are blobs of field that are spread out over space. Instead of a particle that is either here or here or possibly there, we have a field that is here and here and there. Spreading out is something that only a field can do; a particle can’t do it. In fact Heinsenberg’s Uncertainty Principle is not much different from Fourier’s Theorem (discovered in 1807) that relates the spatial spread of any wave to the spread of its wave length. 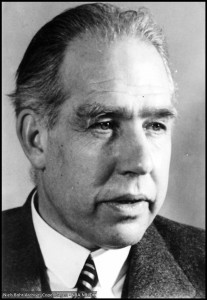 Out of all this uncertainty came the philosophy known as the Copenhagen school (after the great Dane, Niels Bohr) which states, to put it simply, that nothing happens until someone looks. If all we have in QM are mathematical probabilities that such-and-such will be observed, then until the observation is made, we can only talk about probabilities. As to reality, we must give up hope of understanding it. This was too much for Einstein and Schrödinger to swallow. Can it be that nothing really happens, that there are only probabilities, until someone looks? As Einstein lampooned, “Is the moon only there when we look at it?”

Einstein’s bomb. In 1935 Einstein attacked the role-of-the-observer concept by imagining a keg of gunpowder that could be triggered by the quantum instability of some particle. The quantum mechanical equation for this situation, he said, “describes a sort of blend of not-yet and already-exploded systems.” But, he added, this cannot be “a real state of affairs, for in reality there is just no intermediary between exploded and not-exploded” (I2007, p. 456).

Schrödinger’s cat. Worried that an explosion that is only half-real might not be enough to convince people of the point, Schrödinger extended Einstein’s bomb idea to an animal that, according to the Copenhagen interpretation, would be half-alive and half-dead, thereby creating the most famous cat in physics history.

Resolution. Qauntum Field Theory supplies a simple answer for Schrödinger’s cat, and also for Einstein’s bomb. There is no role of the observer.  The bomb explodes (or not) and the cat dies (or not), regardless of whether anyone looks. Field collapse does not depend on an observer. The fields evolve according to field equations and then collapse, but neither process requires that someone be there to observe it. In Schrödinger‘s hypothetical cat experiment, the radioactive nuclei do not emit particles. For example, if they are beta emitters, they emit a “yellow” electron field that slowly spreads through space. At some point in time that cannot be determined from the theory the electron field collapses into the detector and starts the chain of events that kills the cat. Until that time the cat is alive. After that time the cat is dead…

Is that all there is to it? Did I give too little space to discussing these “profound” paradoxes? Well, that’s really all there is to it. In Quantum Field Theory everything is fields. They spread out, they collapse, and they do all this without requiring an observer. When I hear people complaining about the weirdness and inaccessibility of modern physics, I want to ask, “What part of Quantum Field Theory don’t you understand?”