For 100 years, most people have found it impossible to understand physics. Examples include Joseph Heller (“writhing in an exasperating quandary over quantum mechanics”), Bill Clinton (“I hope I can finally understand physics before I leave the earth”, Richard Feynman (“One had to lose one’s common sense”), and even Albert Einstein (“fifty years of pondering have not brought me any closer to answering the question, what are light quanta?).

And yet, there is a theory that makes perfect sense and can be understood by anyone. This theory, with roots in the 1930s, was finally perfected by Julian Schwinger, who once had been called “the heir-apparent to Einstein’s mantle”. This achievement occurred several years after Schwinger had already achieved physics fame for solving the “renormalization” problem, described by the NY Times as “the most important development in the last 20 years” and was duly awarded the Nobel prize. 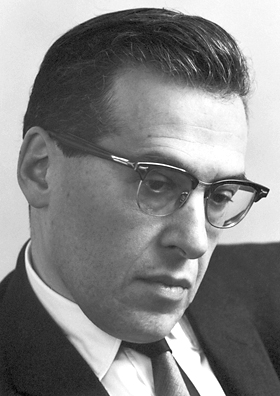 However for Schwinger this wasn’t good enough. He felt that Quantum Field Theory, as it stood then, was still lacking. His goal was to include matter fields and force fields on an equivalent basis. After several years of hard work, he published a series of five papers entitled “The theory of quantized fields” in 1951-54.

Physicists have been fighting a particles-vs.-fields battle for over 100 years. There have been three “rounds”, starting when Einstein’s concept of light as a particle (called photon) triumphed over Maxwell’s view that light is a field. Round 2 occurred when Schrödinger’s hope for a field theory of matter was overcome by the particle-like behavior that physicists could not ignore. And round 3 occurred when Schwinger’s field-based solution of renormalization was superseded by Feynman’s easier-to-use particle based approach.

For that reason, and others, Schwinger’s final development of Quantum Field Theory, which he regarded as far more important than his Nobel prize work, has been sadly neglected, and is indeed unknown to most physicists – and to all of the general public.

However there are signs that QFT, in the true Schwingerian sense is reemerging, so in this sense it is a “new” theory. There have been several books and articles, such as “The Lightness of Being” by Nobel laureate Frank Wilczek, “There are no particles, there are only fields” by Art Hobson, and “Fields of Color- The theory that escaped Einstein” by Rodney Brooks. The last one explains QFT to a lay reader, without any equations, and shows how this wonderful “new” theory” resolves the paradoxes of Relativity, Quantum Mechanics and physics that have confused so many people.